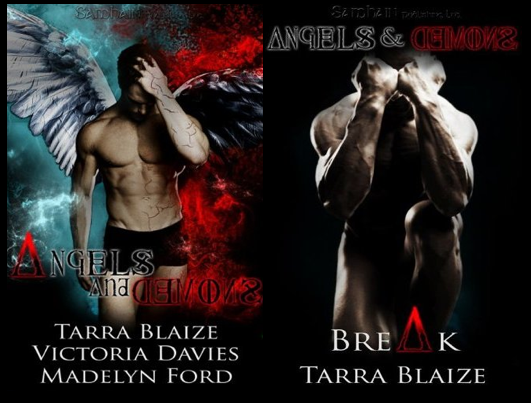 An Angels and Demons story.

Layla Roads’ life is a laundry list of irony. Trailer trash. High school dropout. Beautiful liar. Highly skilled computer hacker. And one additional, extraordinary gift: the ability to see the demons and angels engaged in a ferocious battle on the urban streets at night.

When kidnappers hold her brother, Layla finds herself up to her neck in a plot to bring down a powerful blood demon. A crude, sexual, violent demon who kills without flinching, pushes her buttons, and looks at her with too-knowing eyes. What’s worse is she feels an answering tug of desire.

It doesn’t take Gethin long to figure out he has a pretty traitor on his hands—and that she’s being blackmailed. As a lone human female her quest to save her brother is hopeless—just like the attraction between them. For even if Gethin helps her save all she holds dear, she can never be his…

Buy the eBook at (but not limited to):

Print Anthology can be found at (but not limited to):